Baby Killer Whales, Their ID Numbers, Their Names, And Their Parentage 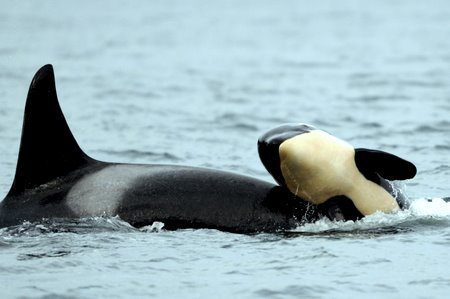 By K.C. Balcomb
22 August 2010
The Southern Resident Killer Whale (SRKW) population underwent a genetic bottleneck sometime between one and two-and-a-half whale generations ago that has resulted in a very small and fragile effective population size – only about 25 whales currently parent any offspring, while the remaining 60 or so whales are either too old or too young to contribute to population growth. That fact alone makes every baby whale precious, or at least it should be precious, to everyone on this planet that cares about the survival of these charismatic icons of the Pacific Northwest. Being born is one thing, surviving in the modern world is another.
My goal is to encourage our human society to make it possible for the effective population size of SRKW’s to grow during the current generation, and for the foreseeable future. Too often, for too long, and too recently we have seen it decline. In order to see increase we must give priority to allowing the whales sufficient food = salmon to survive, year-round, and that amounts to a lot of fish.
At the risk of designating a baby whale an ID number or a name when there is a good chance that it will not survive, and thereby perhaps offending some and wasting numbers, I am going to exercise my prerogative and name a few:
In J pod, there was a new calf born in November 2009 to a sixteen-year old new mother designated J28. I earlier designated the new female calf J46 and called her “Star” for the starring role I hoped she would play in inspiring the public interested in conserving the fish resources needed for the entire SRKW population (and for humans).
Also born into J pod in January 2010 was another new calf, this time a young male whose very young mother is twelve-year old J35. I designated this new male calf J47, and now call it “Looker” because it frequently (and delightfully) raises its head high above the water as if looking around when swimming alongside its mother.
In K pod, there was a new calf first seen in February 2010 with an experienced mother K12, who is also a grandmother. Virtually every time we see and photograph this new rambunctious baby whale it is racing alongside its mother, so I have called it “Speedy” and have designated it K43 - the newest member of slow-growing K pod.
In L pod, a new calf appeared in the summer of 2010, itself an unusual event because most new SRKW’s are born in winter months. The births typically occur in mid-winter seventeen months after the party times of historically abundant summer salmon migrations to these inland marine waters.
Conception of this new calf, designated L115, must have occurred around January or February 2009 when all three pods made an unprecedented mid-winter appearance off Victoria (see Encounter 3, 2009 CWR webpage). The mother is L47, who has lost her previous four consecutive babies (L99,L102,L107,L111) since giving birth to her two successful daughters (L83 and L91), in 1990 and 1995. Without yet knowing the sex of L115 the newest calf of L47, I am going to call it “Hope”, for obvious reasons. “Toast” was submitted, but it is not very optimistic for a whale name when we hope it survives.
L113 was born in the autumn of 2009 to fourteen-year old first time mother L94, and she is healthy and doing well as of this writing in late summer 2010. This year has been a relatively good year for salmon in the local waters, so we are wishing all is well for her. I am going to call her “Molly” after a very good friend whose ashes were spread as L113 and her extended family swam nearby in Haro Strait this summer.

Two other recent L pod calves are worthy of mention: L112 born to L86, probably in January 2009 and first documented in the afore-mentioned Encounter 3 of 2009 when she was less than a month old; I am going to call her “Victoria” for the beautiful city waterfront where she was first seen. [Hold your nose until the sewage issue is resolved! Maybe we should call her “Stinker”?]


And, last but not least, we have L110, a very rambunctious young male born to a young mother, L83 first daughter of L47. We first saw him in August 2007, still showing evidence of fetal folds from recent birth; but, by October he had clear evidence of a mark that will no doubt remain with him for the rest of his life: a large flap of his upper right lip had been torn askew and was protruding awkwardly from the starboard side of his face, perhaps from an encounter with the steel leader of a fishing line. He also now has evidence of a bulbous tooth abscess just in front of the flap. I am going to call him “Flapper”, in anticipation that a bit of Aussie humor will be good for him. He probably does not mind his easily remembered name, though others might.
My apologies to those who may be offended by the names and numbers I have given these whales. I’ve given the subject a fair amount of thought over three decades, and have refrained from giving them meaningless, stupid, or unpronounceable names. You may call them anything you wish, but I have been keeping the official records of these whales from the beginning of their study, and these names and numbers are what we will write in our books. The paternity paper is in preparation and due out soon; and it is likely to be at least as interesting reading, if not downright scandalous. Here’s a little teaser: the whales apparently live up to the motto: “Old Guys Rule” and you can guess what that is about.
We will discuss the reasons for the SRKW population bottleneck in another writing. Meanwhile, do whatever you can to promote healthy wild salmon populations, particularly Chinook salmon, in the Pacific Northwest if you would like these babies and the SRKW population to survive.

Another new calf in L pod, L114 born to L 77, first appeared in February 2010, but it did not survive to summer. No name, but only a number for its tombstone in our records. (see Matriline guide on our website). 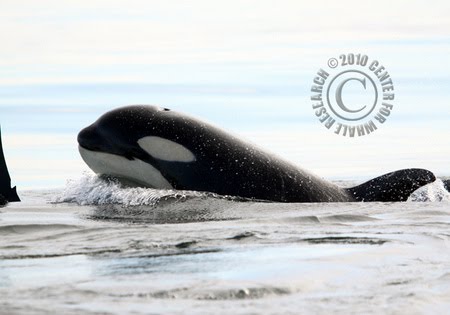 Last November, when this calf was born the Center for Whale Research broke from custom and gave the baby the name 'Star' in addition to assigning it the usual number (J-46, 'J' for its family pod, and '46' for the fact that it is the 46th J pod member identified):

The new baby is designated J46, and we are going to call it "Star", for the role that it will play in showing the human inhabitants in this region that it is important to clean up Puget Sound and restore healthy abundant salmon populations to the Pacific Northwest. That mission brings a message to all of the relevant human nations – USA, Canada, First Nations, Treaty, and non-Treaty – that the first intelligent mammal residents of the region are also investing in these efforts. We could not ask for a more charismatic indicator, a baby whale, to measure the success of our renewed efforts for restoration.

J pod is the most watched family of whales in the Pacific Northwest, or perhaps in the world; and, this is the first year in recent decades that they have produced three babies within one year. We will all be watching, here and worldwide, carefully and respectfully, to see if they beat the odds and all survive. This is the reality show that really means something. 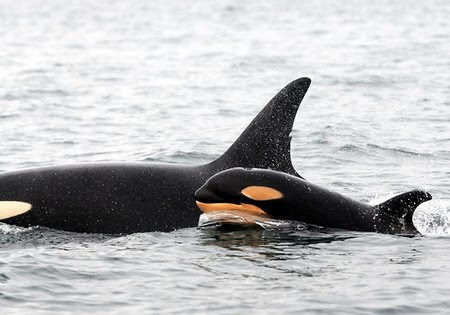 All of the J-pod calves born last year look healthy, and if you look carefully at the picture below you will see all three of the calves together with Star's mom and grandmother, the calves no doubt enjoying some play time together. 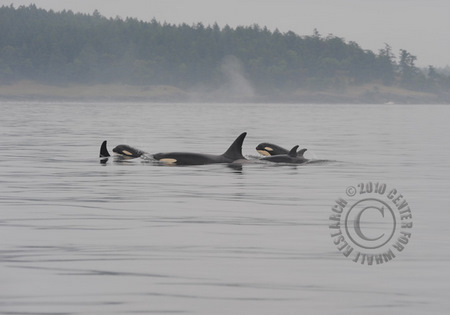 So far, Star's future is shining brightly, as people continue to increase efforts to restore Chinook salmon populations and modify commercial fisheries. This little whale is indeed an icon of humanity's progress, and we'll keep an eye on this Star and report her progress as time goes on.
Posted by Candace Calloway Whiting at 5:47 PM 3 comments: