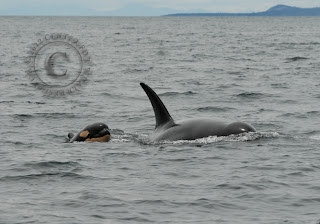 We encountered J,K,and L pods coming in together from the Pacific Ocean to the Salish Sea yesterday  for the first time this year. J and K pods have come in to these
interior waters several times earlier this spring; but, this is the first time that all of surviving members of L pod have been encountered in interior waters in 2012. All three pods were moving slowly toward San Juan Island with a new calf in tow.  One of the adult females in L pod, twenty-five year old L77, has a new calf, designated as L119, who looks to be only a few weeks old. The sex is not yet known. The new calf appeared healthy and vigorous, and we are hopeful that this one will make it. Her previous calf in 2010 was only seen for one day, and it is not known whether she has had other calves that did not survive to be documented.  We will be providing more updates on the new calf as well as our superpod encounter  in the next few days.

Article on Ken Balcomb and the investigation of L112's Death

Click the link to read a KUOW article on Ken:
http://earthfix.opb.org/flora-and-fauna/article/the-man-and-the-orcas/
Posted by Erin at 11:42 AM No comments: 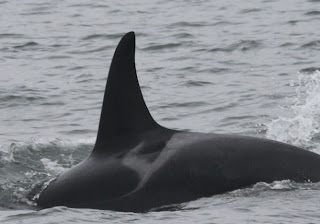 Did you know?A recent review of photos by DFO scientists have confirmed that Southern Resident killer whales were sighted in Chatham Strait, Southeast Alaska, back in June 2007. Southern Residents were previously thought to range as far north as the Queen Charlotte Islands, B. C. This sighting extends their known range about 200 miles to the north.

L112 stranding investigation progress reportThe investigation into the death of Southern Resident killer whale L112 continues. We posted a progress report on our website at http://www.nwr.noaa.gov/Marine-Mammals/Whales-Dolphins-Porpoise/Killer-Whales/upload/L112-Prgrs-Rpt.pdf. We’ll continue to provide updates as we get the results from outstanding analyses and generate a final report.

Update on satellite tagging project
The Northwest Fisheries Science Center has updated website information on the three-day deployment of a tag on J26: http://www.nwfsc.noaa.gov/research/divisions/cbd/marine_mammal/satellite_tagging.cfm.

Canadian marine mammal regulationsAs the federal department responsible for the protection of marine mammals, their habitats, and their migration routes in Canadian waters, Fisheries and Oceans Canada (DFO) has finalized a set of proposed amendments to the Marine Mammal Regulations (MMR) of the Fisheries Act. The amendments are designed to provide enhanced protection for marine mammals against human disturbances.
The proposed regulatory amendments were published on March 24, 2012, in the Canada Gazette, Part I. The Canada Gazette is the official newspaper of the Government of Canada. See it online at:  http://www.gazette.gc.ca/rp-pr/p1/2012/2012-03-24/html/reg2-eng.html. The public has 60 days from the publication date to provide comments on the proposed amendments.