New Paper out in Science

Dr. Emma Foster has provided a brief summery of her paper that recently came out in Science:
"Adaptive Prolonged Postreproductive Life Span in Killer Whales"


1.      The key finding: We have discovered that female killer whales have the longest menopause of any non-human species so they can care for their adult sons. Our research shows that, for a male over 30, the death of his mother means an almost 14-fold-increase in the likelihood of his death within the following year.

2.      The relevance/link to humans: Biologically-speaking, the menopause is a bizarre concept! Very few species have a prolonged period of their lifespan when they no longer reproduce. Like humans, female killer whales buck this trend and stop reproducing in their 30s-40s, but can survive into their 90s. The benefit of a menopause to both human and killer whale mothers is in spreading their genes. The different ways this has evolved reflects the different structure of human and killer whale societies. While it is believed that the menopause evolved in humans partly to allow women to focus on providing support for their grandchildren, our research shows that female killer whales act as lifelong carers for their own offspring, particularly their adult sons.

3.      Why this is important: The menopause remains one of nature’s great mysteries. This research, which involved studying 36 years-worth of data, is the first ever study of its kind and is an exciting breakthrough in our understanding of the evolution of the menopause.
Posted by Erin at 11:34 AM 7 comments: 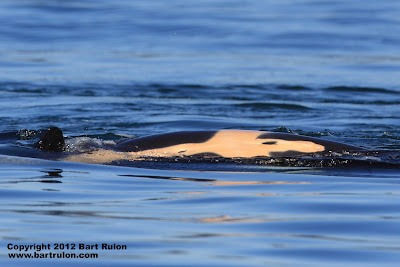 Bart Rulon of Island Adventures, sent us these photos yesterday of J49  rolling over reveling his sex as a boy!
J49 in the youngest member of J pod, first seen on August 6th.  Both him and mom, J37 appear to be healthy and doing well!
Posted by Erin at 11:34 AM 2 comments: