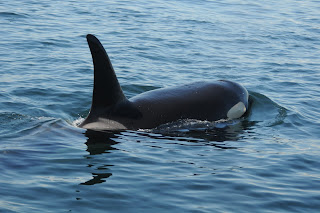 The Center for Whale Research received a report this morning of a potential vessel strike with a southern resident killer whale. The whale that was believed to be struck is L90, an 18 year old female. Witnesses described the whale logging, or floating at the surface, for a prolonged period after a private vessel was observed passing very close to where the whale was thought to be. L90 was then reported to remain on the surface and was breathing heavily. Once we received the report we quickly departed and found L90 with her mother, L26 just off Lime Kiln State Park. She was moving slowly and spending several minutes resting at the surface. She was taking shallow dives and barely moving north with the rest of the whales. We were able to observe her very closely and found no evidence of a vessel strike. On numerous occasions she spent several minutes hovering just below the surface of the water allowing us to get a good look at most of her body, and we did not see any wounds or scratches. We continued to follow her for a few hours and observed that she eventually began to travel at a more normal pace, although remaining behind the rest of the groups of whales. The other whales in the area were behaving normally, resting, foraging and socializing. Based on our observations and descriptions of the event from witnesses, we do not believe that L90 was struck by the vessel. Based on her age and previous behavior we have concluded that she may be pregnant. It is also possible that she may be ill or have some unknown condition.

On several encounters this summer, we have noticed L90 traveling slowly by herself in a rather “mopey” manner. L90 has always been a “whale of concern” to those of us that see her frequently. She is a noticeably a small animal compared to other females who have reached reproductive age.

Additionally, there seems to be something unusual about L90’s body condition. Her body shape is different from every other whale in the L26 matriline. She appears to have a kind of a two-lobed swelling behind the blowhole and a slight arch to her spine in front of the dorsal fin. Whether this swelling is just excess blubber or a sign of illness, we do not know. The only other whale who has been seen with a similar looking swelling behind the blowhole was L107, a calf born in 2005 who did not survive its first summer. It is certainly a different look from the emaciated “peanuthead” look that we have previously seen in several whales who subsequently died.

The slow moving and logging behavior she exhibited today and yesterday may be a sign of that she is in labor and therefore very tierd. She is a whale that we would expect to have a calf at any time since she has passed the age when most females have had their first calf ( about age 14). Although we have no concrete information to support this, we do have concerns that her small body size may make for a complicated pregnancy and birth. Labor pains or a difficult pregnancy could explain her behavior.

The other possibility, that she is ill, is supported by previous observations in other animals. In the summer of 2008 L67(deceased) was observed floating for prolonged periods at the surface before she showed any signs of the emaciated condition that proceeded her death. Therefore L90 could also be showing signs of distress due to an unknown illness.

With respect to today's event, we suspect she may have been laying on or near the surface already when the vessel passed close by, but most likely missed her. It is very difficult to determine distances between vessels or between whales and vessels from the water level. Therefore she may have appeared closer to the vessel than she was.

In any case, we will continue to observe L90 over the next few days. Our hope is that the next time we see her she is traveling with a healthy new born calf.