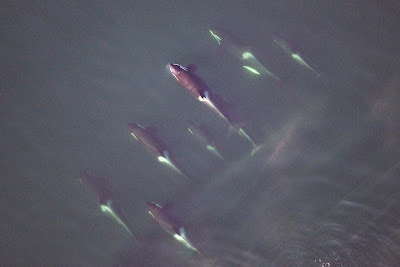 Aerial photograph taken in September 2013 from a helicopter platform 864ft above southern resident killer whales. Research approach authorized by National Marine Fisheries Permit # 15569.
In 2008 a project supported by the NOAA Northwest Regional Office and conducted in partnership between the Center for Whale Research (CWR) and NOAA Southwest Fisheries Science Center (SWFSC) demonstrated the utility of using aerial photogrammetry to estimate morphometrics of southern resident killer whales (SRKWs; Durban et al. 2009; Fearnbach et al. 2011). Using photographs obtained from a helicopter platform, lengths were estimated for 66 individually identifiable whales, representing more than three-quarters of the population. Estimated whale lengths ranged from 2.7 m for a neonate whale in its first year of life, to a maximum of 7.2 m for a 31 yr old adult male. Adult males reached an average (asymptotic) size estimate (±SE) of 6.9 ± 0.2 m, with growth slowing notably after the age of 18 yr; this was significantly larger than the asymptotic size of 6.0 ± 0.1 m for females, which was reached after the earlier age of 15 yr. On average, older adults (>30 yr) were 0.3 m longer than the younger whales of adult age; it was hypothesized that a long-term reduction in food availability may have reduced early growth rates and subsequent adult size in recent decades (Fearnbach et al. 2011).
A recent report of the independent science panel on the effects of salmon fisheries SRKWs highlighted uncertainty over the link between prey availability and population dynamics (Hilborn et al. 2012). Specifically, the panel cited key a data gap of whether the abundance of their preferred prey, Chinook salmon, is low enough to cause nutritional stress, and recommended the further use of photogrammetry to monitor the whales’ nutritional status.
Although initially used to estimate whale lengths, analyses of the 2008 images have also shown potential for detecting changes in whale shape that can be related to body condition (Durban et al. 2009; Durban et al. 2012). Following the panel’s recommendation, the NOAA Northwest Fisheries Science Center is supporting a second photogrammetry field effort in September 2013, conducted in collaboration by CWR and the photogrammetry group at SWFSC, which aims to obtain longitudinal data from many of the same individual whales photographed previously. This will begin an examination of temporal changes in body condition of specific individuals to assess changes relative to reproductive status and age, and ultimately to assess body changes relative to Chinook salmon abundance. 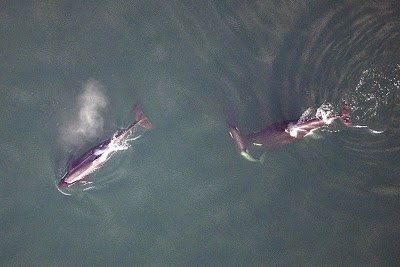