Every August we do a special informational page in the local paper,
the San Juan Journal, all about the endangered Southern Resident Killer Whales. This year, Director Ken Baclomb is the author. We thought we would share them with all of you who don't have access to the San Juan Journal!
This is the third installment:

In previous editions of the Whale Pages, we made the distinction between our Southern Resident Killer Whales (SRKW’s in government jargon – Orcas in our local jargon) and Transient killer
whales (T’s in our local jargon). It is the SRKW/ Orca population of these whales that historicaly
frequented the Salish Sea from May through September each year, folowing the once abundant
Chinook salmon “runs” to the spawning rivers in this region. It was in response to the Orca population
decline beginning in 1996 that the SRKW population was listed as Endangered in 2005, and
a critical habitat area (see below) was defined in US waters. 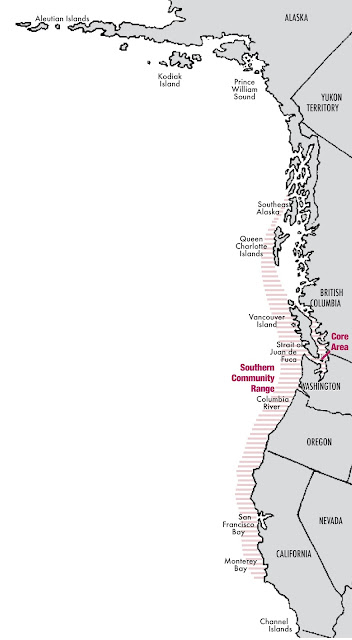 Canada subsequently designated a large area of the Salish Sea north of the US/Canada border as critical habitat under the Species at Risk Act (SARA). It is important to note that these critical habitat designations were based upon legitimate concern for the survival of this beleaguered population of whales, but they are really just words and geographic coordinates – not food that whales need. Our “local” Orcas travel as necessary to and their preferred prey

species – Chinook salmon – and we know that some of the Orca pods go as far south as Central California and as far north as Southeast Alaska in their winter search for this food. In fact, the entire eastern North Paci c continental shelf in this area is habitat for the Chinook salmon that were historically available year-round in feeder schools and river-bound migrants with overlapping schedules (spring, winter, fall, summer, and late-fall, with summer and fall runs predominating). e coastal biomass of this species was enormous, supporting a commercial troll fishery as recently as 1979 yielding a quarter of a milion 15- 45 pound Chinook salmon each year
from the Washington coast, and approximately one million similar sized Chinook from the British Columbia coast.  These fish were headed to the river watersheds of Puget Sound and Georgia Strait, and the big one – the Columbia River. This later major river system alone saw the return of five to nine million big adult Chinook salmon in the mid to late 1800’s (pre-dam construction), and returns dwindling to a much- heralded projection of 678,000 this year  The Fraser River “run” of Chinook salmon is in deep trouble with test series currently indicating a near collapse of the spawning population – a major food source for our Orcas in the Salish Sea. Perhaps the absence of our beloved Orca around San Juan Island this year is related to the absence of food – Fraser River Chinook salmon, in particular. It is doubtful that more words of SRKW critical habitat designation and geographic coordinates will sufficiently address this situation. What we need to do is encourage (if not demand) wild salmon population recovery in al watersheds of the Salish Sea, and enthusiastically applaud the Elwha dam removal for the return of spawning habitat to that river’s legendary Chinook.